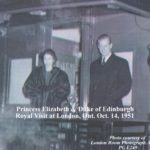 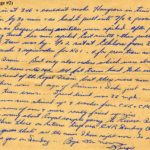 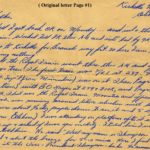 Above left is picture of Princess Elizabeth & Duke of Edinburgh on rear of Royal Train at London Ont. on Oct. 14th, 1951. At centre is Page 1 and at right is page 2 of a letter that I sent to my parents the morning after the Royal Train went through Elkhorn, Man. on Oct. 17, 1951. I was the CP Operator on duty for Royal Train. Below please find a revised version of these 2 pages, which explains the experience more specifically.Click your cursor on all small pictures to enlarge them. At the bottom you can find copies of clearances and train orders issued to trains involved. Click on them too…This is history shared with you….Ferg Devins.

Dear Folks,…Well I got back to Elkhorn on Monday…and into the old routine again. Worked at Elkhorn until 8 a.m. today, and into bed by 9:00 a.m….Then was called at 11:50 a.m. to go to Kirkella to clear the branch way freight from the Neudorf/McCauley subs, onto the Broadview sub (Main Line). So am sitting here waiting for it & decided to drop you a line.

Well the Royal Trains went through Elkhorn this morning with officials on each train. Ahead of the passenger Extra trains was regular passenger train #1 at 2.37. Maurice Roach (Assistant Superintendent from Minnedosa) was on it. Then Passenger Extra 2861 West (the Press Train) with Assistant Superintendent Barney O. Fryer from Souris, arrived at 2:59 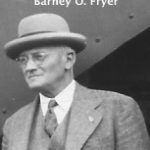 and departed at 3:10. The Royal Train ,Passenger Extra 2863 West with Superintendent Wood from Brandon attending it arrived at 4:58 and left at 5:05.  RCMP and officials were all over it. There were about half dozen people down to see it and 5 cops (3 from Virden and 2 from Elkkhiorn). I was standing on the platform after it arrived and this guy came up and asked if I was the Operator on duty. I told him I was. He asked me my name and I told him. He said “Well, my name is Thompson” and we shook hands and stood around, shooting the breeze for 5 or 10 minutes. After he left I discovered that he was the CPR Vice-President. He seemed like a very nice person.

Eastbouind passenger train #2 arrived at 3:46 and couldn’t make Hargrave in time to clear these 3 trains by 30 minutes and so it had to pull into the number two passing track at Elkhorn because the siding switches at Reaper were spiked closed. After #2 pulled into passing track the section men spiked the east switch closed and then pulled spikes after the Royal Train was by. No. 2 sat at Elkhorn from 3:46 until 5:00. I had to make 3 copies of train orders for train #1, 4 copies for the press train and 5 sets for the Royal Train. But they were only slow orders, which were already on the hook when I came on duty at 24 O’clock All freight trains had to be in the clear 5 hours ahead of the Royal Train, but there were none on the Broadview Subdivision. There was no sign of the Princess and Duke, just Mounties, Officials and Train Crews. Speed limit was 35 mph. Royal Train was sure shined up and coaches from CNR & CPR. I could see into some of them and they were really fixed up nice.

I was wrong about the Royal Couple going to Rivers.They will be passing through there on return trip via CNR on Sunday Oct. 28th.

That’s all the news for now. So will sign off and see you on Sunday. Bye for now…Fergie.

(Please note…The reason that all trains stopped at Elkhorn was so they could take on more coal and water for the engines. The engines 2861 and 2863 on the “Press train” and the “Royal train” were oil burners and only required to take on more water, which meant they took less time at Elkhorn than the usual trains. Also Princess Elizabeth’s father King George sixth died a few months after this tour and she became Queen of England, and the Commonwealth, and is still the Queen in 2018)

You might be wondering why the spaces on these clearances shown below are filled in with a short dash, instead of the “Train ahead, etc”. The Broadview subdivision consisted of double track from Brandon to Virden, then single track, Virden to Whitewood, and double track again Whitewood to Broadview. The single track portion was Automatic Block System and trains were controlled by Automatic block signals, so it was not necessary to fill in that portion of the “Clearance form” as shown below…..FD 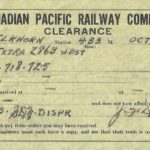 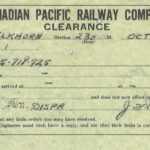 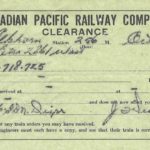 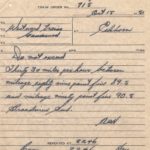 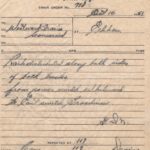 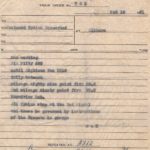