CPR Storekeeper Gordon Crowe (no relation to Morgan & his brother Gordon) came to work in CPR stores at Souris in mid 1950’s. He was from Winnipeg and introduced “Little League” baseball to Souris. There were 4 teams established, namely, CPR, Legion, Kiwanis & Elks. Shortly after the Legion, Kiwanis & Elks agreed to donate $500.00 each for a Recreational Director for July & August. The first one hired was Al Robertson from Hamiota.
I remember asking CPR Engineer Bill Roney, what he thought of our new Rec.Director, and Bill replied “Anyone who can work my son (Allan) for 2 hours on a ball diamond and then when Allan comes home at noon and sleeps for an hour, is an OK person as far as I’m concerned”.
Gordie Lyall was the Rec. Director in Souris from July 1 to Aug. 15, 1962. I was CPR Station Agent at Nesbitt (22 miles East of Souris) and as a Past President of Souris Little League I kept in communication with them.

Jim Down (brother to Souris Butcher Harry Down) used to bring his Brandon Little League team to play our Nesbitt team once a year for an exhibition game. After the game he told me that  we should enter our team into the Provincial Playdowns because he thought we had one of the best pitchers in Manitoba. I called President Al Richardson at Morden to see if we could get entered, but he said that the draw was already made and mailed out. I said that I felt that I was responsible for these players losing the chance to compete in the playoffs. He suggested that I take players to closest team entered. I asked about taking them to Souris. And he said that was okay.

I met Gordie Lyall and Bob Sanderson later and asked them if they had the full complement of 18 players on their team. They said they had room for 4 more and I asked them if they wanted to win the Provincial Championship, because I had some players that could help their team out. They said bring them to their next game. The four players I had in mind were Mark Fisher (a good Nesbitt Pitcher & good batter), Grant Everard (another good pitcher), Don Brown ( a relief pitcher) and Greg Leachman (a third baseman who was also good at bat).The last 3 boys were from Wawanesa.

We won the Manitoba Provincial Bantam BB Championship in Morden,MB September Labour Day weekend of 1962. The Souris Elks Lodge hosted a dinner and donated individual trophies to each player. Two players on this team were sons of CPR employees, namely George Davis (son of Engineer Norm Davis) and Paul     Eliuk (son of Sectionman Conrad Eliuk) also Gary Davidson was son of CPR Watch Inspector Allan Davidson. Another boy who would have been on this team was Andy Murray (who later became NHL hockey coach) but he was on vacation during this playoff session.Later in life, Garry Davidson would become owner of Junior Hockey team, (The Portland Winterhawks), Greg Cameron, Grant Everard, Mark Fisher and Gordie Lyall would become inducted into the Manitoba Baseball Hall of Fame. Please see photo below. Click your cursor on it to enlarge. Click a 2nd time and it will enlarge more. I have added 2 notes at top right hand corner and bottom right hand corner of the photo about Little Leaguers Keith Edwards and Bob Neufeld. 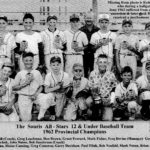 There was another player named Keith Edwards who would have been on this team. I left this part of the story for the last of this article. Keith was playing ball in June 1962 when he developed a strong headache, and his coach Murray Zuk took him out of the game. He went home complaining of a bad headache. He died in an ambulance enroute to Winnipeg. The attending Dr. declared that Keith had suffered from a ruptured aneurysm.The team and management along with the Souris B.P.O. Elks Lodge #21 decided that a posthumous trophy be delivered to Keith’s family at an appropriate time. It was the saddest Christmas Eve of my life. I went around to the Edwards home just before midnight Dec. 24th 1962, after Keith’s Sister Joan & younger Brother Clare were in bed. His Mother Florence was busy putting together a bike for Clare for Christmas and I helped her. Finally, I said to Florence that I had a sad duty and presented her with the trophy. Surprisingly she was very happy to receive it. We cried and we hugged. It was placed on their mantle. Trainman/Conductor Al Edwards (father to Keith) was out on a CPR run at the time. They were very proud and happy to receive it. (This story was written by Ferg Devins) 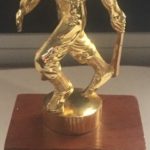